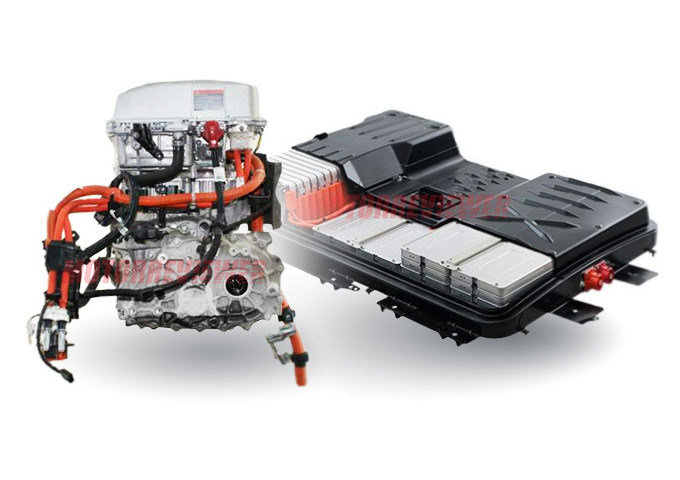 The first-generation Nissan Leaf is a compact five-door electric car firstly introduced in late 2010 in Japan. The second-gen Leaf was roll out in 2018 and one year later, in March 2019, the Nissan Leaf already became the world's all-time best-selling electric car reaching 400,000 sales globally.

The next, second-generation Leaf is equipped with more powerful 110 kW (148 hp) version of the EM57 motor. The transmission type remained; it is a single-speed reduction gearbox with a final drive ratio of 8.193, which spins the motor faster than in pre-2018 models. The vehicle comes with 40 kWh and 62 kWh batteries. The 40 kWh pack has a similar design to the previous 30 kWh battery. It uses a 96s2p cell configuration (192 cells in the battery pack). There are new cells with a much higher energy density (224 Wh/kg). Now, the EV modul is 8 cells connected and housed in a metal case which measures 300 (length) x 222 (width) x 68 mm (height) and weighs 8.7 kg (19.1 lbs). Its compact shape increases the flexibility of pack design. The newest 62-kWh battery has "universal stack" configuration. The latest production processes allowed Nissan to fit more modules into the pack. There are 288 lithium-ion cells from AESC (192 cells in previous packs) with a 25 percent increase in energy density. Thanks to constantly improvements and battery research, this big 60kWh battery has only a 5-millimeter increase in overall height with more than 55% capacity gain over the base 40kWh pack.

When it comes to the reliability of electric vehicles, an electric motor is the last thing on the list to pay attention to. There is just one moving part and a couple of bearings inside an EV motor. But what really limits the vehicle life and become the main source of problems is a battery. How long a Nissan Leaf battery last depends on a variety of factors. The life expectancy of a Nissan Leaf battery varies with the climate it is used in, the amount of fast charging and how far you normally drive every day.

The Gen 1/2 Nissan Leaf is the only EV with no battery temperature control system. Despite the fact that almost everyone says the Leaf pack is air-cooled but in reality, there is no fan blowing air into the pack or onto the outer surface of it. That means what the cells cool simply by radiating their heat into the overall battery pack (more like in regular smartphone). The battery cools by air while driving and doesn't when stopped/parked and even charging. That is the main problem of the Nissan Leaf batteries. The battery generates a lot of heat while fast highway driving, punch accelerations, and using rapid charging (fast DC charging). Add here a hot climate and your battery relayed on the weather will degrade and lose energy capacity faster than a phone battery. That happened to the 2010-2012 MY Leafs with 24kWh battery pack which had older chemistry battery - they just suffered in hot days. Of course, nearly all of the 2011-2012 batteries are still going strong, but the max range is extremely short (especially during in cold weather). In this case, the newer 30 kWh battery is a better choice for the first-generation Nissan Leaf. This newer chemistry battery is less prone dropping off so quickly and its 30kWh capacity reduces the number of charging cycles.

In the second-gen Leaf, the 40kWh battery just overheats and slows down the rapid charging. Rumor says that the 62kWh battery pack has an additional cooling fan, but it is not true. The thermal management of the LEAF e+ with 62kWh pack is similar to the 40 kWh versions.

Summarizing, in normal climates, you might expect 8-12 years of useful battery life for the first-gen Leaf that still can store and deliver nearly 80% of its original capacity. The owners of the 2018+ Leafs need to charge it fully far less. With avoiding the rapid charging (due to overheating problem) what will extend the battery life to 12+ years.